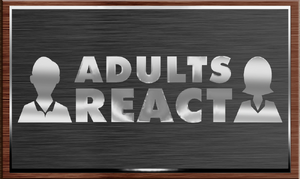 Adults React was the fifth react series of The Fine Bros' React series. It premiered on the FBE channel on July 16th 2015. The reactors are at least 20 years old, with the ones who have children also appearing on Parents React, and those in their early 20s having a place in College Kids React.

Note: Stats up to date until ADULTS REACT TO TRY NOT TO FEEL OLD CHALLENGE.

Retrieved from "https://the-fine-bros.fandom.com/wiki/Adults_React?oldid=44955"
Community content is available under CC-BY-SA unless otherwise noted.