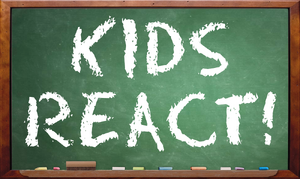 Kids React was the first series of The Fine Bros' React series. It premiered on the FBE channel on October 16th 2010. The reactors are those below 14 years of age (marking the year they enter high school).

Note: Appearances does not include bonus episodes.

Retrieved from "https://the-fine-bros.fandom.com/wiki/Kids_React?oldid=45014"
Community content is available under CC-BY-SA unless otherwise noted.