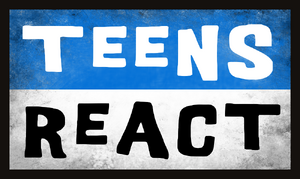 Teens React was the second react series of The Fine Bros' React series. It premiered on the FBE channel on November 17th 2011. The reactors are those with ages between 14 and 20 years. Graduations mark both Kids entering the minimum age and Teens moving onto Adults.

Note: Appearances does not include bonus episodes.

Retrieved from "https://the-fine-bros.fandom.com/wiki/Teens_React?oldid=44996"
Community content is available under CC-BY-SA unless otherwise noted.